Navneet Mathur sells more than US$20 million of new and used equipment every year through his Vermeer dealership in India.

When he's looking for used equipment, Navneet trusts one source above all: a Ritchie Bros. auction.

"I don't think we have been treated any less than platinum by Ritchie Bros. so far!" 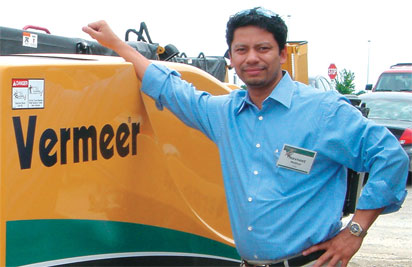 In 1996, Navneet Mathur sought – and gained – the exclusive rights to distribute Vermeer equipment in India for one reason. "I am fascinated by trenchless technology!" he laughs. "You might say I am obsessed! It has completely revolutionized the way utilities have been installed in India. Now they can be installed underground with no mess, no digging up of roads. More people have power and gas, and there is less disruption to the common man."

Navneet was just 23 years old in 1996 and newly graduated with an MBA from New York's Rochester Institute of Technology. He returned to his hometown of Ajmer and established India's first Vermeer dealership. Today Worldwide Machinery Solutions has additional locations in New Delhi, Calcutta and Bangalore, 75 employees and annual sales in excess of US$20 million.

"We feel we have achieved success because our customers have been successful: we have been able to help the small contractors buy the right equipment at the right price and they have grown themselves to become much bigger," says Navneet. "Take care of your customers: that's our motto. I think Ritchie Bros. works on the same level."

Navneet first heard about Ritchie Bros. auctions at a party in 2002 where he met "a friend of a friend": Jeroen Rijk, who has worked for Ritchie Bros. in Europe since 1995. At the time, Ritchie Bros. did not have an office in India and Navneet knew nothing about the company. Intrigued by what he heard from Jeroen, Navneet flew to Texas to attend an auction. He bought 14 machines – and "I never looked back," he says.

"There are two main things I like about Ritchie Bros. auctions," says Navneet. "First and foremost, there are no bid-ins. That is the most comforting factor. I know that I am not bidding against the owner of the machine; it's a level playing field. Second, Ritchie Bros. is very honest and upfront. I know that the information they give me about the equipment is true. The prices at Ritchie Bros. auctions are fair – you pay what the machine is worth, the market price."

Navneet now sources all of the used equipment for Machinery Solutions from Ritchie Bros. auctions across North America. "At first I went to all the auctions in person but slowly we've moved more on to online bidding," he says. "There is a lot of valuable information on the

Another valuable resource is Sameer Malhotra, his Ritchie Bros. representative. "Sameer brings the philosophy of the company to his personal behavior with all of his customers," says Navneet. "He is right there when I have questions or need more information. He calls me regularly and informs me of upcoming machines. Sameer is like an alarm clock! He doesn't let us miss bidding on something we'd like to buy."

Navneet is now looking to diversify Machinery Solutions. He is hoping to soon start selling used general construction equipment – "all sourced through Ritchie Bros.," he notes.

"India has always been a hub for used equipment but as the economy progressed and more construction started to take place, there was an increase in demand for equipment," he says. "New machines are very expensive in India so a specific niche opened up. Used equipment filled in that gap. My customers have responded positively when I tell them I will be selling used construction equipment – cranes, excavators, loaders."

Since 2002, Navneet has purchased millions of dollars of equipment at Ritchie Bros. auctions around the world – earning the distinction of being Ritchie Bros.' first Platinum Card holder in India. "It was a very pleasant surprise," says Navneet, of hearing the news. "But until we got the card we did not know what the benefit of being platinum was – because I don't think we have been treated any less than platinum by Ritchie Bros. so far!"

Find the equipment or trucks you need at an upcoming unreserved auction.