In business for more than 45 years, the Bullin family have been buying and selling at Ritchie Bros. auctions for almost as long

Stewart Bullin has seen some great innovations at Ritchie Bros. over the years—but appreciates that the values of the company have remained consistent

Before Ritchie Bros. introduced detailed equipment information I would hire a mechanic to go and inspect the equipment for me. But now all the information is right there online-it's very helpful. 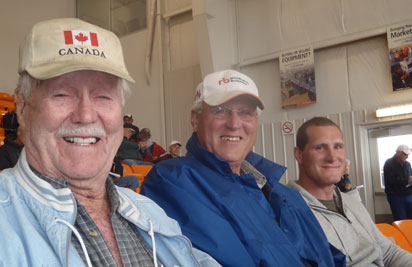 Jack Bullin started his contracting company, Bullin Construction, in British Columbia, Canada in the 1960s. In the 1970s his company became a true family business when his son Stewart—then in his early 20s—began working and attending equipment auctions with him.

"My dad began selling equipment with Ritchie Bros. at some of their first auctions in Prince George and Edmonton," says Stewart. "He had a great relationship with Dave Ritchie right from the start—and so did I. If anything was ever a problem you could talk to Dave and he would get it looked after immediately."

By the 1980s Bullin Construction had changed its name to Rockbusters Crushing and son Stewart was playing an increasingly larger role. Ritchie Bros. auctions were now an essential part of their business—providing quick access to quality equipment, which allowed them to bid on new diverse jobs and grow as a company.

"Back then we used to jump on a plane and fly to Houston, Toronto or wherever to look at a machine and bid on it, thankfully everything is available online now," says Stewart who is now an avid online bidder. "Right now I am watching three auctions simultaneously online. I've gone through the online catalog and know exactly what machines I am interested in. So, now I can sit here and work while I wait for my lots to come up."

Nowadays Stewart is always keeping an eye on the equipment market by watching Ritchie Bros. auctions around the world online.

He says the amount of information Ritchie Bros. now provides on its website helps him tremendously, saving him both time and money.

"Before Ritchie Bros. introduced detailed equipment information I would hire a mechanic to go and inspect the equipment for me," says Stewart. "But now all the information is right there online—it's very helpful."

In the late 1990s, Jack Bullin retired, Stewart assumed a leadership role in the company—and his son Mike came on board not long after, becoming the third generation Bullin in the business.

"Even though my dad is technically retired, he still loves to go to the sales to buy machines for us," says Stewart. "Buying from the auctions is something that's in your blood—that passion never goes away."

"Family businesses like ours and Ritchie Bros. are great because you can deal with people you can put a name to and they generally have a more down-to-earth look at the way the company is run," says Stewart. "Through the years we have had a number of different sales reps at Ritchie Bros. and they have all been knowledgeable and honest, which is very important to me."

Find the equipment or trucks you need at an upcoming unreserved auction.